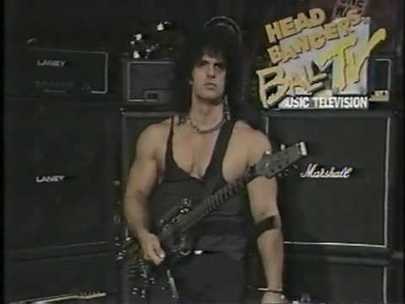 Kane Roberts on MTV's show Head Banger's Ball
“Adolescents are society’s risk takers” (Klein et al. 24).  Adolescents are known for taking many unnecessary risks which is part of the reason they are under so much scrutiny from society.  “As many as one in four 10-17 year olds, nearly 7 million children, are at high risk for school failure, delinquency, early unprotected sexual intercourse, and substance abuse” (Klein et al. 24).  Along with this scrutiny an explanation is often required as to why this occurs in modern society and at the brunt of this analysis is heavy metal music.  Heavy metal music has been scapegoated by parents, religious groups and government organizations for decades as to why youth have acted in rebellious and risky ways.  New forms of media, music being one of them, have been the blame for much of this risky behavior.  This is clear in heavy metal music with broadcasts on the internet, MTV, some radio stations, and concerts throughout the world.  A visual of MTV's popular metal show "Head Banger's Ball" is shown on the left.

In the article titled “Adolescents' Risky Behavior and Mass Media Use” by Jonathan D. Klein, Jane D. Brown, Kim Walsh Childers, Janice Oliveri, Carol Porter, and Carol Dykers from the Pediatrics Journal, it discusses how mass media was found to attribute to the risky behavior in adolescents.  Through the study they found that adolescents who frequently used media such as radio, music videos, television and movies, often engaged in more risky behavior than those who used less.  In addition, white males who reported five or more risky behaviors were more likely to prefer the music media of the heavy metal genre.  Risky behaviors analyzed included cheating, drinking, cutting class, sex, smoking cigarettes, driving vehicles without permission, smoking marijuana, and stealing (Klein et al. 25). Though the study found a correlation with metal music in the data it did not find conclusive evidence.  The study failed to isolate the variable of heavy metal to find that it was a cause of risky adolescent behavior. It did however find media use as a source.  Additionally, the study only isolates white males as preferring heavy metal and since a majority of metal fans are white males anyhow, it is not conclusive to say that this form of media leads to risky behavior.

As stated before, adolescents are the most likely in society to take risks.  This cannot however be attributed to heavy metal but media does have an influence.  Media plays a role as teens beg for attention in a society that seems to cast them away.  Media and social networking are simply ways of gaining attention or viewing what others have done.  With this, risky behaviors and the ideas associated with them can be spread throughout the world quickly and easily.  The following videos provide examples of such instances and suggests that heavy metal preference was simply a correlation and/or coincidence of the study with external sources to blame.
Powered by