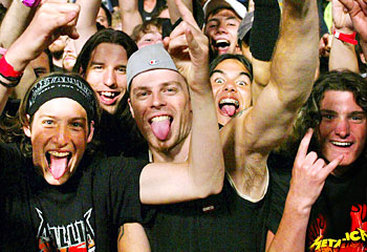 Heavy metal music has been subject to accusations of causing psychological turmoil and illness among adolescents.  With the often assertiveness and aggressiveness of metal fans, combined with the dark themes composed around metal music, it is easy to make assumptions that heavy metal causes psychological stress.  However, it is found that there is correlation rather than causation of heavy metal music and psychological effects.  In the article “Can Music Preference Indicate Mental Health Status In Young People?” Facility Baker and William Bor represent these findings.  In their studies they found that heavy metal music did not cause suicidal thoughts among adolescents but rather had a positive influence (Baker and Bor 285).  It was instead found that outside issues and home life were the link to these negative actions rather than the music itself.

In Jeffery Arnett’s article “Adolescents and Heavy Metal Music,” he discusses the family and home factors that affect adolescents.  Through his studies he found a majority of the subjects he interviewed had parents with a clear dislike of metal.  In one such case an interviewee reported a mother who would take his metal tapes and destroy them.  The studies also found a distant relationship among adolescents and thier parents.  One person reported his father as being his “exact opposite” and mother as viewing him simply as an “investment.”  Yet another interviewee reported frequent fights with his step-father and having an alcoholic biological father stating “It bothers me a lot that I haven’t had a real father” (Arnett 87-88).  Adolescent heavy metal fans seek the music as a way to cope with their lives rather than it being a cause of psychological turmoil.

Home life and outside issues are found as the cause to many of the problems adolescents face.  In the article “Music Preferences, Personality Style, and Developmental Issues of Adolescents,” Kelly Schwartz and Gregory Fouts profile the typical heavy metal adolescent.  In the profiling they show adolescents preferring heavy metal music as lacking a sense of identity as well as having “higher levels of discomfort within the family” (Schwartz and Fouts 211).  Heavy metal music helps them because it “tells them that they are not alone” and gives a sense of belonging with other fans.  Heavy metal “gives them a refuge from validating their confusions about identity” and “provides a safe context for beginning to explore and organize a sense of self” (Schwartz and Fouts 211).  With adolescent heavy metal fans often having problems that are linked back to outside issues, the music has a positive influence by helping them feel included and deal with stress.
Powered by